End of the Soviet Empire

The 90’s decade was marked by the end of Soviet Union. This empire’s flag flies for the last time in 1991. However, soon after, the nationalist matter imposes unprecedented fights between brother territories.​

THE FALL OF THE BERLIN WALL

Two years after, on August 21st, 1991, the eyes of the world turned to the Soviet Union. «Moscow, noon, ten hours in Portuguese time today, Boris Ieltsin unfurls and waves old Russia’s tricolored flag. It is the reconfirmed victory over the coup. The crowd rejoices. A page turns in the country’s History». The words are Carlos Fino’s, RTP correspondent, who closely watched the failed attempt of a coup d’état that shook the Soviet Union.

THE COUP D’ÉTAT AND THE RESISTANCE (RUSSIA)

The coup had already begun on August 19th. It was announced that the president of the Soviet Union, Mikhail Gorbachev, was sick and that had been pushed aside from his post, when in truth he was in vacation in Crimea.

However, the creators of the coup faced a resistance promoted by the president of Russia, Boris Ieltsin, who went to the Russian Parliament in order to try to stop the coup organizers.

Carlos Fino was in loco in the precise moment when Boris Ieltsin climbed over a tank appealing to order and democracy.

«The popular mobilization against the coup is very big, and the awareness about this force helps to decrease the fear. For this night, it is still expected an eventual attack of the troops faithfull to the Force that seized power, and Ieltsin’s tanks have, therefore, to be prepared for any possibility».

That night, several confrontations happened, causing fatalities and injuries. Hours later, tension was decreasing. It became clear that there wouldn’t be an assault to the parliament from the coup organizers. At sunrise, ten armored cars crossed the city and placed beside Ieltsin. Carlos Fino registered the moment:

«Here we see tanks passing, going to the surroundings of Russia’s government quarters, not to attack it, but on the contrary, to defended it from the troops faithful to the central authorities».

On December 23rd, it is published in Time magazine an exclusive interview with the president of the Soviet Union.

On December 25th, 1991, Mikhail Gorbachev announces to the country his resignation request.

In that night, CNN broadcasts an interview with the resigning leader. His statements spread worldwide.

“Tonight the red flag of the Kremlin was lowered for the last time”, reported ITN.

THE DISSOLUTION OF THE SOVIET UNION

This event came to open the Pandora’s box. Many countries that until then were under the control of the USSR saw many nationalist and ethnic issues burst. The first conflict to be revealed was Nagorno-Karabakh’s. The region, which had already belonged to Azerbaijan in 1923 and to Armenia in 1988, is again in the center of the dispute when Armenia and Azerbaijan got independence from the Soviet Union.

In 1992, the European Broadcasting Union launches an operation to cover the conflict, which was at its peak. RTP goes into action, and Carlos Fino is the special envoy. «This is an image from hell. Somewhere in the boarder of Nagorno-Karabakh, a missile launcher of forty pipes, operated by Azeri soldiers, pours fire and steel over the neighbor Armenian town of Askeran». 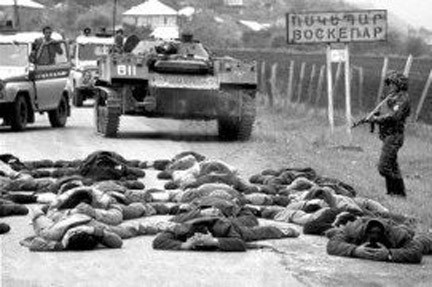 Carlos Fino experienced the war horrors, and obtained proof that there were massacres in the region. On March 14th he opens his chronicle in Telejornal with shocking images of the traces of an Armenian offensive to Khodjali. «The brutal images of the Khodjali massacre, in the past February 26th, when an undetermined number of escaping Azeri families was decimated by Armenian guerrilla fighters, shocked Azerbaijan and changed the western perception of the war».

The conflict between Armenia, Azerbaijan and Nagorno-Karabakh would come to extend until 1994, when a cease-fire was signed between the countries’ representatives. Nagorno-Karabakh became indeed an independent republic, while remaining part de jureof Azerbaijan. However, peace negotiations are still kept until today between the two nations to decide the territory’s future.

Jim Clancy, news anchor of the north-American channel CNN, reports that he was in Baku, in Azerbaijan, when people recognized him.

«They recognized us. (…) Ten thousand people turned around and they gave a rousing applause for CNN. Just for who we were. Because we were able to go beyond the borders, to leap across them, with satellite news coverage and let them know what was happening in other countries».

Then end of the Soviet Union also caused the separation of Moldavia. The republic, which belong to Romania, won its independence from the USSR, raising problems for the Russian minorities that emigrated there. In 1990, the Russian population of the left margin of the Dniester River declared its independence from Moldavia, creating the Dniester Republic. This separation wouldn’t be recognized by Moldavia neither by the international community 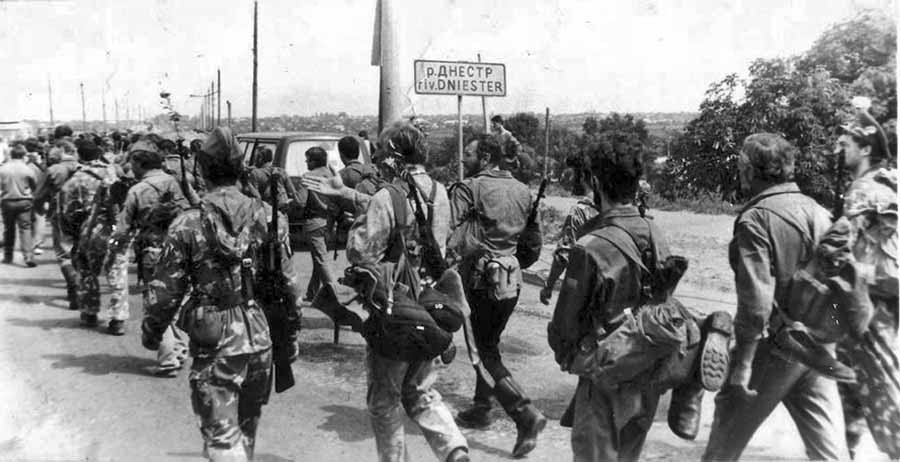 The conflict aggravated in 1992, and the European public televisions’ network installed in the Moldovan capital of Kishinev, again in an operation assembled by the European Broadcasting Union. Once again, Carlos Fino and the cameraman Vadim Meshki joined TVE and crossed the Russian lines searching for images.

«A panic situation this afternoon, in Gueska, a small village in the right margin of the Dniester. In the shooting that followed, the war material they had on board exploded, and the four youngsters in the special deployments of the Moldovan police burned to death».

Hundreds died in this conflict. The violence would end when Russian troops intervened, but the independence of the Dniester Republic would never be recognized. 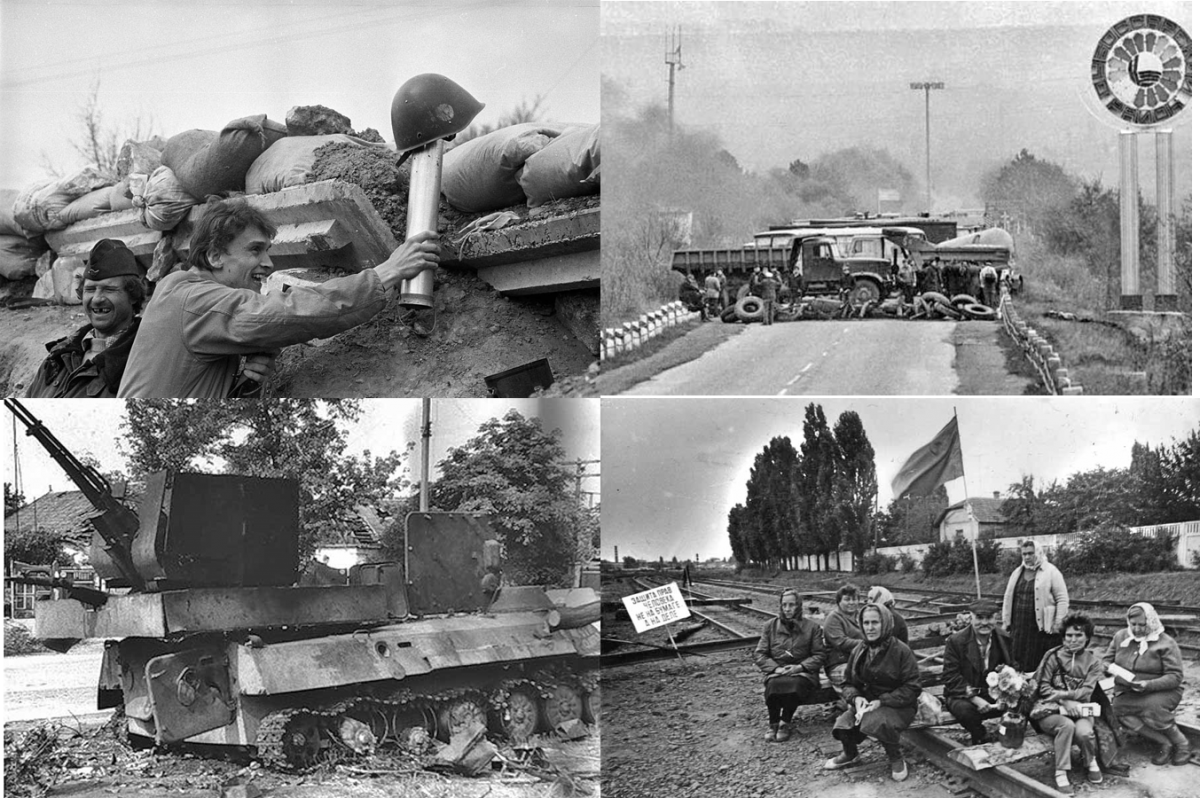 The conflicts between Georgia and Abkhazia are also an important mark in the history of the disaggregation of the Soviet Union. Zviad Gamsakhurdia was elected in 1991 for the presidency of Georgia, after a referendum that legitimated the country’s independence. But his actions quickly earned him several enemies, who retaliated in the end of that same year. Eduard Shevardnadze accepts the invitation to rule Georgia.

However, Gamsakhurdia, after tem days of exile, returns to his country and reignites the war, with the support of an aliance created with the Abkhazia government (an autonomous region incorporated in Georgia). Such alliance between Gamsakhurdia and the Abkhazian wasn’t accepted by the government of Georgia and the conflicts begins in 1992, in the capital of Abkhazia, Sukhumi.

«The Sukhumi airport, itself already a target of the attacks done by the Abkhazian, is every day the stage of chaos scenes, with thousands of people invading the track every time a new airplane arrives from Tbilisi, and trying after, in the confusion, to obtain a seat aboard», describes Carlos Fino in Telejornalin RTP, on October 17th, 1992.

A year later, in 1993, Carlos Fino got back to the center of the war in Georgia. At the harbor town of Poti, disputed by both sides of the conflict, the Portuguese reporter obtained the confirmation that Russian troops have entered the hostilities. A Russian official explained to Carlos Fino: «Now, things are clearer, Russian entered in the conflict with Gamsakhurdia. They have already told us officially that he is an enemy of the Russian troops».

The last war chronicle in Georgia, on the 15th of October, 1993, closes with a smiling soldier. «A pause in combats, a simple Georgian soldier had even the will to come to speak to the RTP team and say that he knowns nothing about politics, but would like to send a hug to Eusébio».

Chechnya is the most famous case of the separatist struggle in Russia since the collapse of the Soviet Union. In 1991, Chechnya declares itself independent. In 1994, the president of Russia, Boris Ieltsin, commands the sending of troops to restore Russian sovereignty in the region. 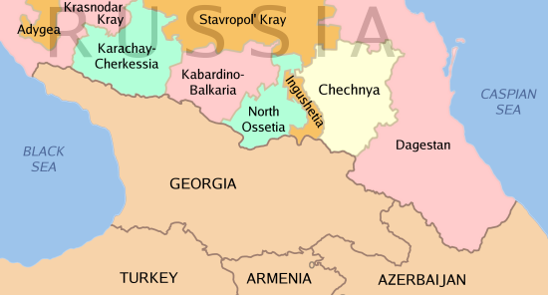 On December 11th, 1994, troops invade the Chechen capital, Gozny. However, the Russian militia would see itself poorly prepared for the offensive against the Chechens, who retaliated and were able to push the Russians away.

Carlos Fino, in a live transmission done in the middle of the capital’s square, spoke the following words: «There is no restlessness nor tension. On the contrary, here in Grozny we came to find a great calm, based on the general determination of defending the republic’s sovereignty».

The guerrilla between Chechens and Russians would extend until August of 1996. The images emitted in RTP’s Telejornal were of destruction, suffering and death. 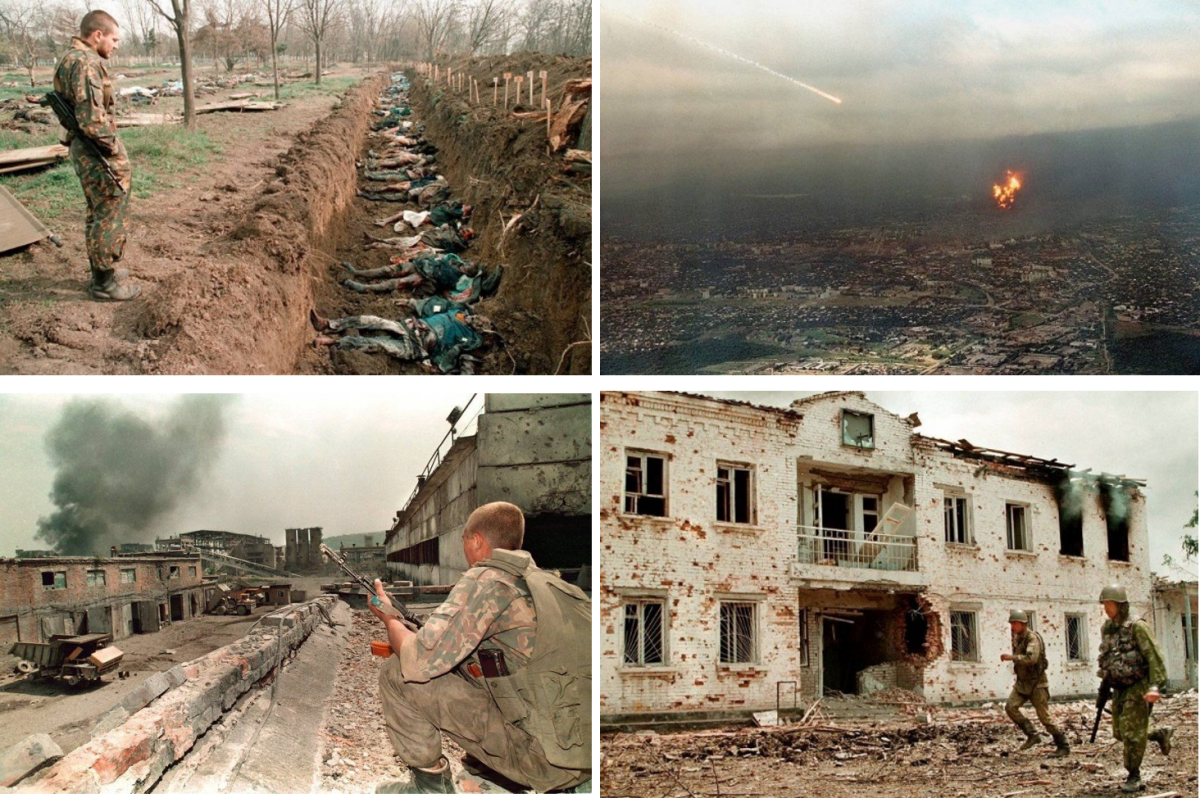 «The first impression is dust. It is not a regular dust, of dirt. It is a thinner, cosmic dust. It is a smoke that seems coming from the dark walls, riddled with bullets, full of holes, of cracks. (…) From the houses without a roof, nor façade, from the façades alone, without houses. From the destroyed bridges. From the buildings from which only a black skeleton remains».

Russian troops abandoned Chechnya in the end of 1996. The war had made 90,000 deaths. Later, in 1999, the Russian prime-minister Vladimir Putin organizes a new attack against the Chechen separatists, and the conflict in the country would come to reignite. 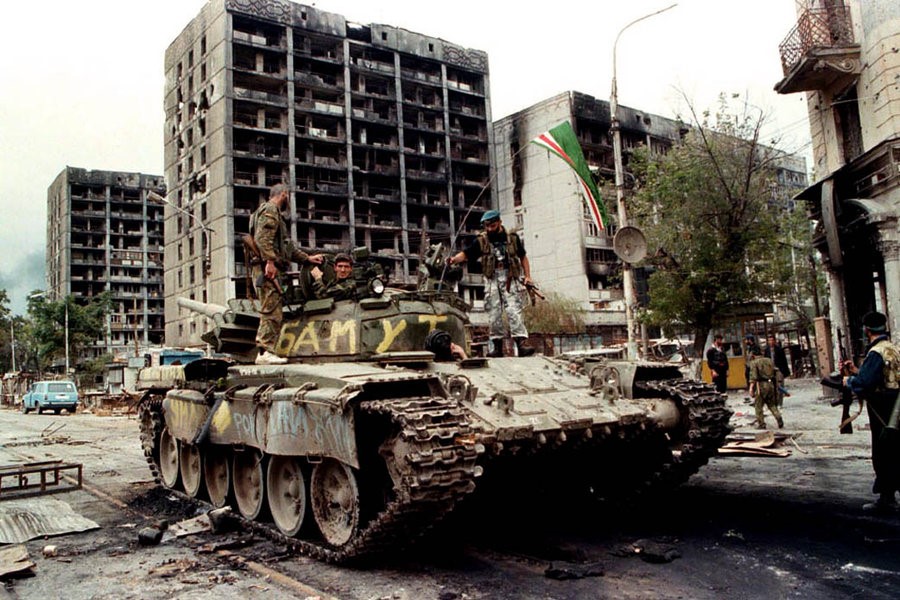 It was only in 1993 that the transition period of the post-soviet era reached its end. Boris Ieltsin’s reforms entered in conflict with the legislative power, and the president decided to dissolve the parliament, in a measure considered unconstitutional.

In September, the parliament dismisses Boris Leltsin from his position and nominates Aleksandr Rutskoi as president. 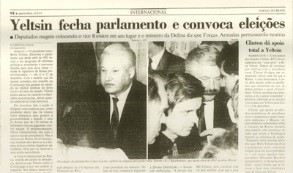 Quickly the tension grows in the streets. Several popular protests against the president and against the deterioration of life conditions burst in the streets of Moscow, while communist congressmen barricade inside the White House. Carlos Fino and José Milhaes were at the location when protesters attacked the police cordon to approach the parliament. «Some policemen still tried to disperse the crowd, shooting to air several times, but pressure imposed, and protesters broke the police cordon to the Supreme Soviet».

The situation aggravated when Boris Ieltsin triggers the army to put an end to the crisis, causing hundreds of deaths.

«Despite all this war apparatus and the dramatic events that we’ve just witnessed, this it is not exactly a civil war. We are now before the armed action of a legitimate government, destined to evict an illegal group that occupied the Supreme Soviet building, and tried to seize power».

The use of force ended with the end of the crisis. Aleksandr Rutskoi and all other congressmen surrendered and were arrested. Boris Leltsin ended with the remains of the USSR and established a new configuration of the political regime. 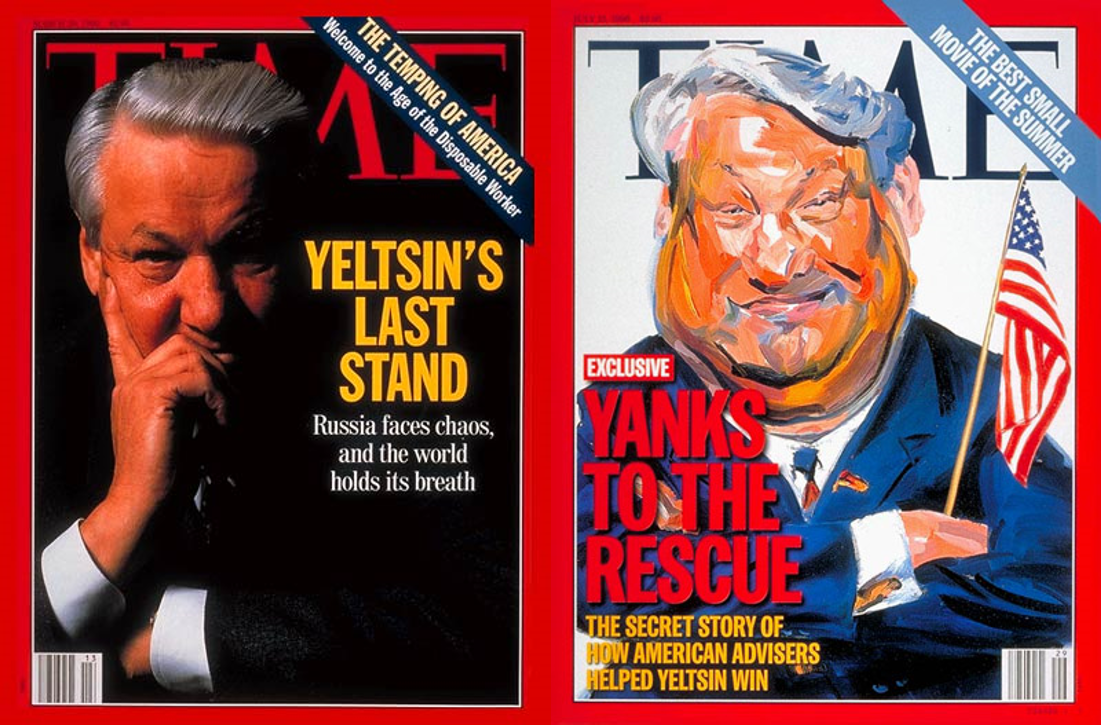